Sometimes it’s easier – and less confusing – to express your emotions by punching in specific emojis than it is to describe your state of mind using actual words. But as expressive and comprehensive as emojis can be, there are limits.

For example, if you’re a parent dealing with a new baby or a small child, there aren’t many emojis that can truly convey your emotions to your family and friends over text. You could choose the baby face emoji and maybe a handful of others to articulate how you’re feeling, but outside of that, the standard emojis aren’t particularly useful for struggling parents.

That’s why Luvs Diapers created the Luvs Momoji keyboard – the “Official Keyboard of Experienced Parents.” The Momoji keyboard is available for both Apple and Android devices from their app stores and features essential parenting emojis such as: 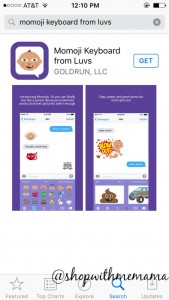 In addition to those emojis, the Momoji keyboard also has some fun baby faces, baby poop in six different colors, and a package of Luvs diapers. With their new keyboard, Luvs hopes to appeal to parents who want to visually express the everyday emotions that come with parenting and raising a child.

The Momoji keyboard is just one new keyboard in the ever-evolving world of emojis. In April 2015, Apple redesigned their emoji keyboard to offer more diverse emoji options because users complained that the available emojis didn’t accurately represent who they were. With this update, not only could you use same-sex family emojis, you could even change the skin tone or hair color for a variety of emoji characters.

In October 2015, the emoji keyboard was updated again to include a slew of new emojis that people had been waiting for – the taco emoji, in particular –that would make conversing with emojis more complete. The latest update brought us 184 new emojis, including:

Regardless of who you are or how you’re feeling, you should have a plethora of emojis available to express any and every emotion, even if you’re a struggling mom or dad dealing with a sick baby (sad baby face + green poop emoji).

Of course, even as emojis allow you to express things in greater and greater detail, they still can’t handle every problem that a parent might struggle with. If you need a family lawyer for any domestic legal issues, contact me today to understand your rights and see what options are available to you.